Paul French, who writes about China for Ethical Corporation from Shanghai, where he has lived for two decades, offers some thoughts on good China books below.

Before we get into that though, Paul’s superb historical novel on China, Midnight in Peking, is an excellent read. He even solves an old murder in it. More here.

Ethical Corporation 2011 China Books Round Up

As has been traditional now for several years this is the annual Ethical Corporation China Column best books of the year round up for 2011, a few days later than usual.

This wasn’t necessarily a vintage year for China books but for those looking to unravel the mysteries of the Middle Kingdom, especially from a CSR or ethical viewpoint, these may be useful.

Before the list proper for 2011 I’ll plug Richard McGregor’s The Party: The Secret World of China’s Communist Rulers, which is now in paperback and is, to date, the most revealing book about how China works that’s been published.

So it’s worthy of mention. But here’s what appeared this year:

1) Who’s Afraid of China?: The Challenge of Chinese Soft Power, Michael Barr (Zed Books) – Barr’s analysis of China’s efforts at soft power around the world is insightful in pulling together the myriad ways in which Beijing is trying to raise its profile.

From the perfidious influence of Beijing-funded and guided Confucius Institutes in western universities to the re-imaginings of the legends of Zheng He and Confucius to support Communist Party policy.

2) China’s Green Revolution: Energy, Environment and the 12th Five-Year Plan, various Chinadialogue.net contributors (available on Kindle via Amazon and free at the link above) – a great swift analysis of where the environment sits in China’s 12th Five-Year Plan and how serious the government is, or isn’t, about implementing their plans. Those arguing for more restraint and more push in China’s green policies, both within and without China, make their cases here.

3) Ballot Box China: Grassroots Democracy in the Final Major One Party State, Kerry Brown (Zed Books) – Brown’s book is an important assessment of the state of play with village and township democracy and elections in China. Though much hope was put in this process that it would extend to the cities, Brown argues that the elections have shown many in Beijing just how fragile and weak the support for the Communist Party is in China and so have been slowed to an almost total halt now.

4) Gaming, Governance and Public Policy in Macao, Newman Lam (Hong Kong University Press) – governance and public policy are always going to be contentious issues when you are talking about an island that is basically one large gaming house ruled over by Beijing. What happens when gaming concerns take over an economy, per capita incomes double in five years and Macao’s revenues now beat out Las Vegas’s.

Naturally there are any number of new social problems in the enclave too while transparent public policy making and ensuring open governance among the gaming concerns has been a major issue too. Macao is a wild place – governance in Macao is a wild field to work in it seems!

5) Consumptionomics: Asia’s Role in Reshaping Capitalism and Saving the Planet, Chandran Nair (John Wiley) – Ethical Corporation regulars will know Nair as an occasional contributor and columnist for the magazine and always a controversial one.

In this book Nair makes a well rounded and precise argument as to what might be the future for the planet if East Asians begin to consume at the level of Americans or Europeans.

It’s a scenario we’re all going to have to come to terms with ultimately and this book is a good start to what will have to become a more complex and inclusive debate in coming decades. 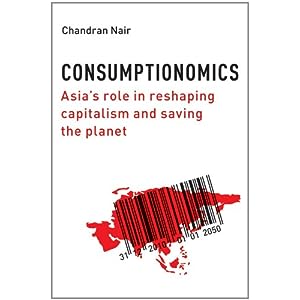