Map of labour unrest in China

China’s social unrest is becoming more obvious as technology aids in showing the rest of the world the country’s growing pains, reports Paul French from Shanghai.

Thanks to the website Shanghaiist.com for alerting me to the rather useful crowd sourced map of labour unrest in China produced by Cornell PhD student Manfred Elfstrom, a lad who will surely go far!

China has not been overly friendly to mapping services from Google on down to any and all user-generated maps demanding all had government licenses.

Applying for a government license to map labour unrest is what is known in English as ‘a hiding to nothing’!

Acording to Manfred on his site, China Strikes the purpose of China Strikes is to track strikes, protests and other collective actions by Chinese workers to defend their rights and interests.

I hope that over time the site will serve as a resource to those wishing to better understand and support the labor movement in China.

There are 49 entries to date, each categorized by location and industry.

Anybody can submit a report, but they will only be “verified” if coming from a reputed NGO or media outlet, or if at least two reports on the incident can be found.

The earliest report listed is in January 2009. So far the site’s not been blocked in China but one feels the phrase ‘only a matter of time’ popping into one’s head!

Here’s a screenshot of the map: 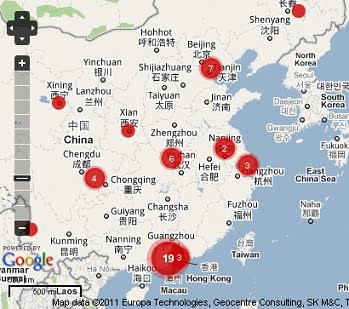